The Armenian Church of the Holy Translators is part of the Armenian Apostolic Orthodox Church, which has a rich Christian history dating to the time of Christ and the apostles. Through apostolic succession, the Armenian Church directly traces her existence back to two of the original apostles, Thaddeus and Bartholomew, who brought the Gospel of Christ to Armenia.

Armenia accepted Christianity as the official state religion in 301 A.D. through the conversion of King Drtad by St. Gregory the Enlightener, making it the first Christian nation. 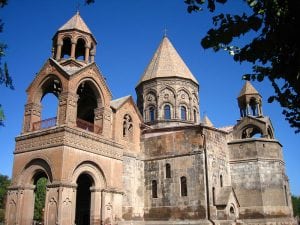 The Armenian Church is headquartered in the Monastery of Holy Etchmiadzin, in the Armenian city of Etchmiadzin. It is home to His Holiness Karekin II, Supreme Patriarch and Catholicos of all Armenians.